Arata blog provides you with interesting and current information as well as with background aspects of our activities.

Future returns on the capital market …

There is a way for “alternative investments”. But what is this way? The following blog showes you hard facts as well as background information.

What will happen in the next 30 years?

Over the past 30 years, investors were quite spoiled. With American and European equities hyou could achiev on average according to a study by McKinsey about 8% average performance per year. Bonds brought in the same period between 5% – 6% per annum.

Predictions clearly see gloomier for the future. Yields in the conventional asset classes such as stocks and bonds are directly related to economic growth. In periods of growing the global economy very quickly, the returns are known to be significantly higher (as in the last 30 years) than in periods of low economic growth. Currently, many experts have the assumption that we are in a phase of lower growth rates. This is confirmed by the world politics and its political representatives unfortunately daily. The developed countries have currently struggling with issues such as high public debt, high unemployment, refugee issues, etc …. But even the so-called emerging markets suffer from significantly lower growth rates. The best example of this is found in China. 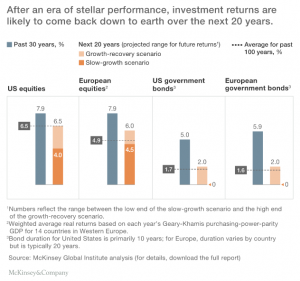 Low growth generally leads to lower corporate profits and thus to low valuations of companies, which in turn may reflect directly into a lower, average performance of the shares in the coming years. This lack of confidence in the global economy usually brings low interest rates particularly at the long end of the yield curve with it. The expected returns of bonds will therefore in the future suffer less. On top of that could also be a more rapid increase in the yield curve push bond prices down significantly. All in all, have to investors, institutional and private, to the idea that their portfolios may be exposed to a strong distress in the future.

What solutions are there?

What are “Real Assets” and what’s involved?

From my point of view, particularly real assets are a very interesting investment opportunity. With this, I mean assets that you can watch and touch, such as real estate or long-term infrastructure investments. These types of investments provide long-term, stable cash flows, which bring at least partial protection against inflation. Infrastructure investments usually brings another positive aspect of your portfolio with it: sustainability. Sustainability in the investment – this issue is becoming increasingly important, especially among European investors.

It should be noted in any case that this type of investment can only be used for incorporation into the portfolio. What is the right portion? The portion increases currently by Germena investores from 5 to 20% Investments in infrastructure are weighted currently in German institutional portfolios with approximately 1% very low. Here we will see huge increase, which has already begun. A key success factor in these types of investments is the availability of assets.

Where is our USP?

We have access to medium-sized businesses, which are positioned nationally and worldwide outstanding. The success of these companies is mainly due to even the “family structure”. This success they want not miss in the future and still benefit from the above developments. For this reason we see for our customers in the “Real Assets”, we successfully serve for many years and have usually about assets and also a Deal Pipeline, an excellent perspective. Our main task is, the transformation of the success of our customers from the medium real economy to the financial economy. We accompany this process sustainable, and we invest our international partnerships.

About the author, Heinz Hofstaetter – Over 20 years of international experience in senior management positions in the areas of consulting, banking, finance, asset management, valuation and Real Assets.

Areta GmbH is an advisory firm specialized in Real Assets and SME (“Mittelstand”). We operate successfully in the “D-A-CH” region and see ourselves as a link between the real economy and finance.

Areta – a modern management advisory firm. Areta does not provide investment services and activities in accordance with WAG in relation to financial instruments.